Yep, you did read that right.

Darkness & Light has been allocated a new cover.

Well, my editor contacted me some weeks back and told me they were considering changing the cover so that it will ‘fit in’ with the other covers of the series as an entirety.

They wanted something that was more relatable to the Blue Moon cover.

They also wanted something that was going to look like it belongs with any covers they’re planning to produce for future Holloway Pack titles.

In layman terms: They want the covers, when all standing side by side, to look as though they are part of a collection and to be recognisable as part of that collection.

On top of that, they reasoned that Darkness & Light was almost One Year Old (O_o) and they thought it would make a nice (almost) anniversary marker.

To be honest, I was wondering what on earth they might come up with. The image of the wolf duet has been in my head a long time. And I’m pretty restricted in my ‘vision’ when it comes to imagining visual art and the end results, so to see something else ‘in my head’ was nigh on impossible.

However, my editor sent me the result, and after a couple bits back and forthing and a few tweaks made here and there, I’m happy with the finished article.

And here it is: 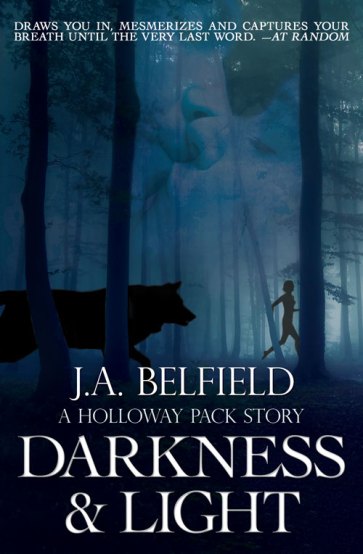 For now, the new cover will only be available in the E-versions of the book.

But that’s not the ONLY news!

To help promote its new look, Darkness & Light will be available in E-format throughout the month of June at the bargain price of 99c (or 70-summat-pence to us Brits).

The new E-version of Darkness & Light will sport three Sean Holloway POV scenes at the back.

Two of those (Of All the Burger Bars in All the Towns … & Mates Reunited) I have already made public on my website and are available for viewing any time.

However, the third one, titled: ‘Welcome back, Jem‘ has never been released anywhere, and for the time being, will ONLY be available via the new E-book.

So if you know anyone who hasn’t managed to nab a copy yet and would like one, be sure to spread the word and let the peeps know.